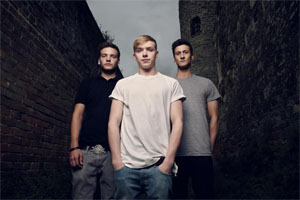 Press To Meco is not only a term NASA uses to signify a successful shuttle launch, but it also happens to be one of the most exciting new bands in the UK. The London based trio who released their self-titled debut EP in June 2012 featuring 4-tracks which give the perfect introduction to the band and the varying styles they present. In an entirely seamless manner they manage to combine intricate instrumental sections perfectly with three part harmonies, crushing breakdowns and sing-along choruses.

The EP received a really positive response from magazines such as Big Cheese, Kerrang, Rocksound and Punktastic, with a number of zines choosing to host the video that accompanied the track 'Burning The Reward'.

Riding high on a wave of positive comments, Luke, Lewis and Adam are currently finalising new songs that will be recorded in December and released in the first few months of 2013.