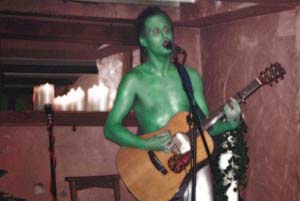 Jim'll's Brain was born in 2458BC and frozen in Dr. Frankenstein's lab until rats chewed through the mains plug, He has found his way to London via a mix up at FedEx and now performs a one man show that includes songs about mental illness, Damon Albarn and stalking This year will be releasing the all new album, "Brain Damage". Critics have acclaimed with comments such as "Best Titles Since Snakes On A Plane", and "This Is Your Life On Drugs".
ARTIST LIVE SHOWS
Buffalo Bar
Tuesday 17th May 2011 The Bull & Gate
Tuesday 15th March 2011 The Bull & Gate
Sunday 13th February 2011
MAILING LIST
Sign up to our mailing list here