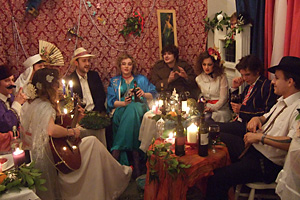 Paul Hawkins And Thee Awkward Silences are chaotic, cathartic and catchy as anything, like no other band around. Combining the spirit of punk with a theatrical sense of showmanship and a sound that takes in apocalyptic disco, outsider pop and intense snarling stamping rock, they offer wit, originality and just enough vulnerability to win your heart. In recent months Hawkins and the band have played Latitude, recorded a Radio 1 Session and released debut album We Are Not Other People, which has delighted, excited, bewitched and befuddled in equal measure. "Hawkins is far closer to Edwyn Collins and Elvis Costello than one might think. All three have great pop sensibilities, all three are talented lyricists, all three completely understand and appreciate irony and satire, and all three, when it's appropriate, can also be really really miserable. All three can also synthesise these components into a potent, smoking elixir of pain, regret, depression and black comedy." - Room Thirteen
ARTIST LIVE SHOWS
The Bull & Gate
Tuesday 15th February 2011 229
Wednesday 12th November 2008
ARTIST NEWS ARCHIVE
Watch: Paul Hawkins & Thee Awkward Silences
Friday 10th October 2008