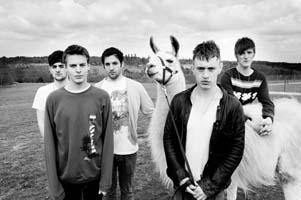 Rob The Rich are five cheery young souls from Brighton who have names like Bambi and Bear and who write songs called ÄòTigerÄô. As if this wasnÄôt already enough to love them for Rob The Rich then deliver a sunny live set where instruments are swapped around and melodies zip hither and zither like crazed post-Foals puppies. Expect a debut single called ÄòBetterÄô to see the light of day on Label Fandango on June 5th.
ARTIST RELEASES