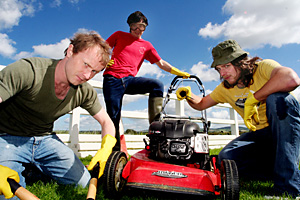 Fighting With Wire emerged from the ever creative Northern Ireland music scene in 2003, the brainchild of guitarist Cahir OÄôDoherty (Jetplane Landing / Clearshot) and drummer Craig McKean (Clearshot). An idealistic bunch, theyÄôve since done what rock bands are meant to do: they wrote a bunch of songs, and took to the road. The last three years has seen them play shows with the likes of Reuben, Biffy Clyro, Million Dead, Seafood, YCNI:M and Future Of The Left, racking up hundreds of miles and honing their live show into a ferocious explosion in the process. After putting out a number of limited edition DIY singles, they took a breather at the end of 2006 and finally started work on their long-awaited debut album. Recorded in Northern Ireland and finally completed in mid-2007, Man Vs Monster is a dynamic beast of a record Äì raging out of your speakers one moment yet gentle and intricate the next, and all without losing focus of whatÄôs important: the song. WhatÄôs next for Fighting With Wire? More touring and more songs, we would expect.
ARTIST LIVE SHOWS
229
Thursday 24th April 2008
ARTIST NEWS ARCHIVE
Fighting With Wire Make Fandango Debut
Tuesday 15th April 2008