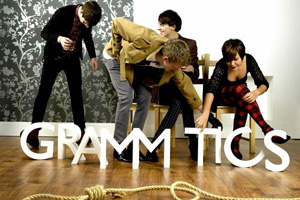 Grammatics formed around April 2006 in a terraced house basement just outside Leeds city centre. They soon found that they share many mutual loves: argument, doing things in the most difficult possible manner and general pretentiousness. They are all deluded with grandeur. They write songs faster than they can learn them, they rarely repeat song sections without warping them into something different, they attempt to utilise any instruments they can find regardless of quality or tone. Grammatics are a stylistically diverse band and like to hop though most of the genres related to indie-rock. 'Beautifully atmospheric, imagine if Arcade Fire made darker music and put more emotion into their vocals.' - Sandman
ARTIST LIVE SHOWS
Night & Day Cafe
Sunday 21st October 2007 The Dublin Castle
Tuesday 21st August 2007
MAILING LIST
Sign up to our mailing list here