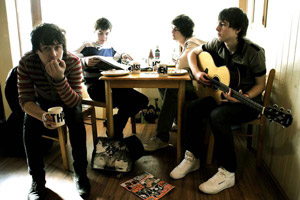 The Displacements are a young band from Leicester with big ideas. They honed their talents playing free gigs in local pubs and getting all of their mates rammed in. They then started touring and playing gigs all over the country travelling in the backs of vans and big red trucks. Their style has been likened to The Who, a Hamburg era Beatles, The Kinks and even Scouse Horror! Or as one reviewer put it: 'Think Motown meets the Clash after a pint with circa 1966 Mick n Keef along the way'. They then started running their own club night in Leicester, each one they put on sold out and a real buzz started. After a riotous set at the Summer Sundae festival, plays on Steve Lamacq, a manager that goes by the name of Justin, lots of gigs, drinks and songs, they've been busy releasing singles on Stiff Records...
ARTIST LIVE SHOWS
229
Saturday 25th October 2008 Night & Day Cafe
Sunday 21st October 2007 The Borderline
Thursday 31st May 2007 The Dublin Castle
Tuesday 22nd May 2007
ARTIST NEWS ARCHIVE
Leicester's Hot New Things Chat To Fandango...
Wednesday 16th May 2007